Recently I posted about a trip to Bangkok and the fun time we had at the Bangkok Safari...well this has got nothing to do with it! LOL Last month the family went for a little restaurant hopping to celebrate our wedding anniversary and my birthday, which is only a day apart.
No this is the first ime we've done this but I was pretty down then and wanted to just celebrate. hehehe 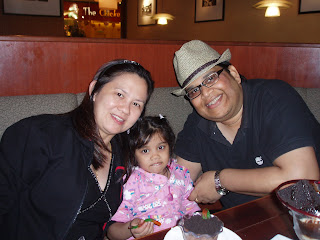 A moment of peace...

On the day eve of my birthday we went to Tony Roma's of course...my favourite joint (which reminds me that I haven't been there in a week because of that blasted flu). I'm not going to elobrate cause the food there is excellent and we always have a good time. Then on my actual birthday we ended up in Chili's for another wonderful meal. The day after that was our wedding anniversary...now for that I wanted to go to somewhere different. Oddly enough someone in the office gave me a keychain that day and it was from Africa. The tagline was out of Africa...after the movie. That reminded me of this restaurant near my place that goes by the same name. So i actually googled it and found that it was a great restaurant that was highly rated by one of the expat magazines, which meant one thing to me....authentic. 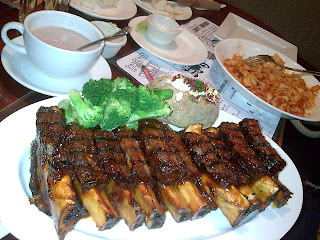 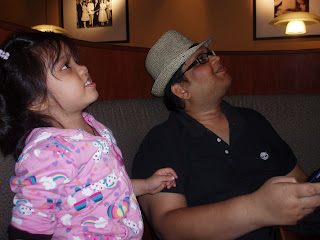 Okay so we watch TV when we're out too...wife and her darn spy cam

To think that it's been around for ages and was so near by (five minute drive) that I have driven past it many a time and that had great reviews and that we had not been there at all. So we of cours decided to go there to celebrate our 16th wedding Anniversary! We didn't really want to eat that much because it was the third day of celebrations but the minute I saw the Johannes Burger with blue cheese grlled on an open flame...I had to have it and it was excellent. The next time I want to try the Broewars sausage.... 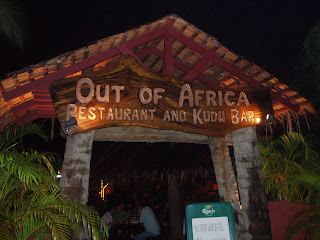 Entrance to Out Of Africa

The restaurant was actually quiet when we got there becaues we went early and pretty soon it was filled to the brim as there was a group of visiting African students and their Malaysian and South African counterparts there for some gathering. The pictures below don't realy do justice to the place as the athmosphere was really great and I'd recommend this place to anyone. 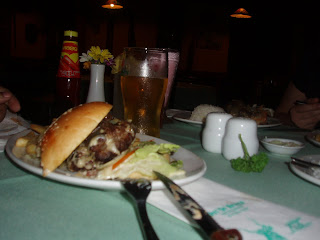 We were still enjoying ourselves actually. So we went for the fourth day of celebrations. It was Saturday and we went to Bubba Gumps in the Curve. They had a set menu promo and it was the ribs again for me...but this time it was babyback ribs which gave Tony Roma's a run for their money. Being loyal is one thing...good ribs is another LOL It's always fun when the family goes out...in fact I rather go out because at home I'm glued to the TV like a moth to flame. LOL 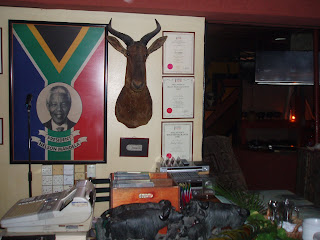 Nelson mandela was there to say hello...NOT 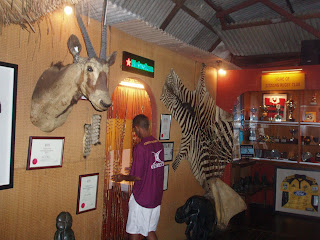 Entrance to the bar...err...or was it the toilet... That deer gave up it's life to bring us closer to Africa and it's preserved wildlife...pun intended LOL 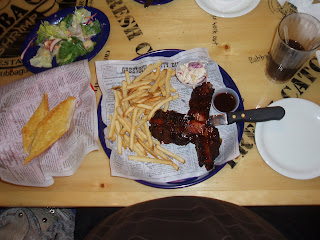 This was the set at Bubba's 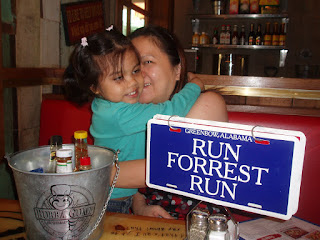 Wah, must try this out of Africa place la. The food looks good :D

You had the same set as my at good old Bubba's I see :D

I have not been to Out of Africa in years! I think I last visited in 1995!

Yeah bud the food is prety good...planning on making another trip there soon.

Yeah Bud that waas the best set...and those babyback ribs were really soft!

Hi Dano! Wow you must have gone when it first opened. I know it's been around for a while just not sure since when. Cheers

He he I can see it now... which one better? The one at Chilli's or this one here?

Hi GP!! Actually it's been up for a while LOL

Was stuffed...had the bread, and soup and coffee...and by the time got to the main course just couldn't eat any more LOL

The blue cheese burger tastes better than it looks...you should try it sometime...:)

I thinkthe one at Tony Roma'ss was the best...this is pretty good...and I can't rememebr the one at Chili's...like I said you should try it sometime...gee now I'm getting hungry...hehehe

Thanks GP for the belated B'day wishes! We had a great time....was trying to drown my sorrows too but cause I don't drink that much we did it with good food! LOL Wanted to post it earlier but as usual was busy with stuff. Hugs to you too! :)

Nice deco theme at the restaurant :)

Hi Janice! It really was a nice rustic feel about the place. Planning on going again soon. Cheers! :)

Adrian
I'm a dad who is growing up with my little one...

HOME OF THE GENIE KING!

adopt your own virtual pet!